He was not entitled to speak and he did not take it, no question concerning him having been asked. Pierre Michelin was scrutineer of the general meeting of shareholders of Michelin, Friday, at the Zenith of Cournon d’Auvergne, in his capacity as new president of Mage Invest, the holding company bringing together shareholders of the Michelin family. Third son of Édouard (who died in 2006), Pierre Michelin indicated in a press release that he wanted to “continue and amplify the missions of the family”. Which therefore did not cause any stir or reaction, except that of President Florent Menegaux whom we questioned at a press conference. (see below).

Previously, Michelin held its high mass almost as usual, with however the pleasure of meeting again after two years of virtual assemblies, by interposed screen and behind closed doors.Pierre Michelin was present at the general meeting, for the first time as scrutineer. Photo Franck Boileau

From the health crisis, “from which we have not emerged, because in China, the Covid is starting again”, hammered the president of the group, and from the consequences of the conflict in Ukraine on the supply chains which impose visual navigation, or even the suspension of activities in Russia was widely discussed. But also “agility and resilience” allowing Michelin, despite these difficult times, to post record 2021 results (24 billion euros in sales, 3 billion in operating profit) and a first quarter of 2022 just as solid with sales up 19%. 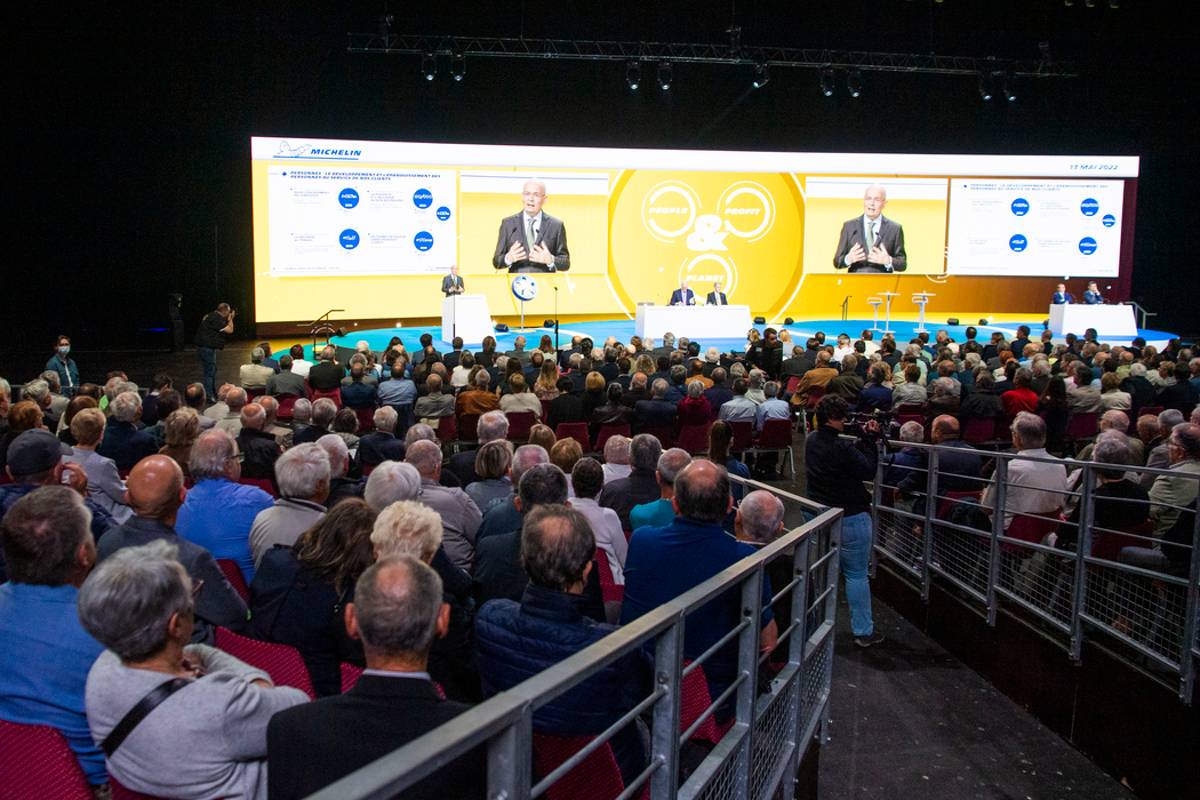 The meeting was held for the first time at the Zénith d’Auvergne. Photo Frank Boileau

The dividend of €4.50 per share proposed when the 2021 results were published in February was widely approved, like all motions. Note also the decision to divide the par value per share by four, which does not change anything for current holders (whose portfolio will be multiplied by four), but should “make the Michelin share more accessible and allow a better sharing of the value “.

“We are no longer a family business”

Florent Menegaux appeared serene in front of the press, after the general meeting of shareholders, and hardly troubled by the arrival announced that very morning of Pierre Michelin, 25, as president of Mage Invest.

“We are very proud of our origins and happy to know that the Michelin family continues to invest in Michelin. Mage Invest represents 4.2% of the shareholders (7% of the voting rights), Pierre Michelin takes care of the interests of this investment company, I am happy for him. But our shareholding is spread all over the world. »

A Michelin again at the head of the group one day?

Asked whether a Michelin could return to head the group one day, the current boss added, denying any form of annoyance: “It has nothing to do. We are no longer a family business. Pierre Michelin is charming, he went to school with my son, he is Édouard’s son, but being a member of the family does not mean that you have the skills to run Michelin. »

Close-up on the future innovation center of Cataroux, in Clermont-Ferrand

Pininfarina and NamX run on hydrogen