Uldman: Tyr’s Legacy is a 5-player Dungeon in Dragonflight. This is a new version of Uldaman with new rooms and new bosses. This is an experience that mixes elements that we already know from this WoW dungeon with completely new monsters and mechanics. Find our guide to Uldaman below.

Uldaman is an old-school dungeon, so you might have a hard time navigating it if you’ve never been there. Stay close to your companions if this is the case. The trash is nothing special. There are a lot of dirty beasts like basilisks, spiders and troggs. You have to wait for the last part of the dungeon to discover new enemies. I am thinking, for example, of the ebony golem or the dragon servants of Deios. However, there are no particular mechanics to report.

The architecture is well known but Uldaman regulars will be happy to discover new rooms!

The Lost Dwarves are Uldaman’s first boss. You will fight Baelog, Eric the Agile and Olaf, the heroes of Blizzard’s The Lost Vikings game. The three characters each have specific techniques, but the fight is also very original because of the boat that appears during the fight. The Dwarves can take refuge there and cannon fire at you while the rowboat flies around the room!

At the end of the fight, the Dwarves will board their boat. This will rise in the air and fire cannonballs at the players. If you stay put, you will take direct damage, a DoT and be knocked back. Attention, the effect is cumulative, the damage can therefore increase quite strongly. This is the funniest moment (seeing the Dwarves in the boat is quite fun) but also the trickiest since the red zones are numerous and you have to manage to avoid the shots. 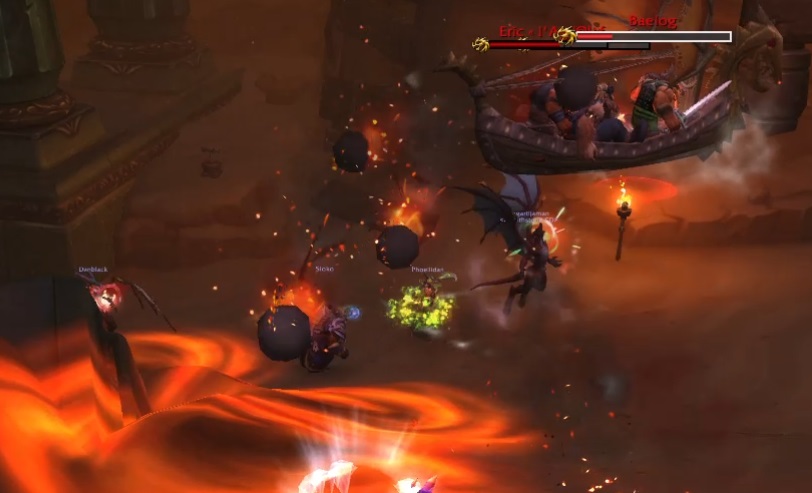 The three Dwarfs in the famous rowboat

Bromach is the second boss and can be found in the same place where you faced Ironaya in the original Uldaman. It’s a pretty tricky boss the first time you face it because you have to manage the adds running in all directions.

When Bromach launches call from the deep, this means that 5 adds will arrive. There are two kinds. The first is the Stonecave Ambusher which can jump on a random player and deal damage to all players within 4m of the impact point. The second is the Cavestone Geomancer. It swings chains of lightning that can bounce off players. Ideally, the spell should be interrupted. Note the number of Ambushers and Geomancers varies. You can very well have 5 ambushers or only 3 accompanied by 2 geomancers.

Regularly, the boss will summon a Seismic Totem. Its range is long enough to damage all players, so shoot the totem down as quickly as possible. It is important because when the totem disappears, all troggs are stunned for 10 sec. During this time, they are immobile and take 200% damage.

Unless Bromach is about to die, try to deal with a few adds anyway. These are rather annoying and can become even more so when the boss throws Bloodlust. The buff increases the haste of his allies for 20 sec.

Finally, Bromach can also launch a thunderous clash. It’s an area attack that damages players within 12m of the boss. 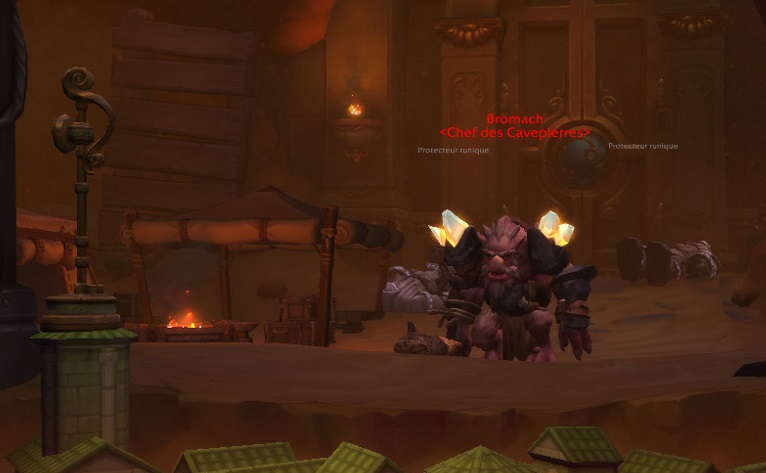 Talondras is a boss that requires understanding how Resonance Orbs work. If your party manages to handle this mechanic correctly, you will be fine.

At the start of the fight, Talondras has 0 energy points. It will accumulate gradually and once it reaches 100, it will launch Titanic Reinforcement. This is a big buff that increases his damage by 50% and causes him to become unstoppable and immune to all control effects (buff duration depends on difficulty mode). You have already understood that your objective is to prevent Talondras from reaching 100 energy points.

To do this, you will use the Resonance Orbs which will regularly appear at the location of three players. Warning: if you touch an orb, you will be stunned for 6 seconds. The tank must therefore kite the boss and make him touch the orbs. However, Talondras has two spheres around his head. Each time Talondras touches a resonance orb, a sphere disappears. Once the two spheres have been eliminated, force the boss to touch a 3rd orb, this will reset its energy to zero.

The rest of the fight is easy to handle. Talondras regularly launches a Crushing Trample which deals damage and knocks back all players. So don’t stand in front of an orb, the recoil could cause you to hit it. Finally, we also note that the boss can throw stones at a player, who will take direct damage and a DoT that lasts 10 seconds. 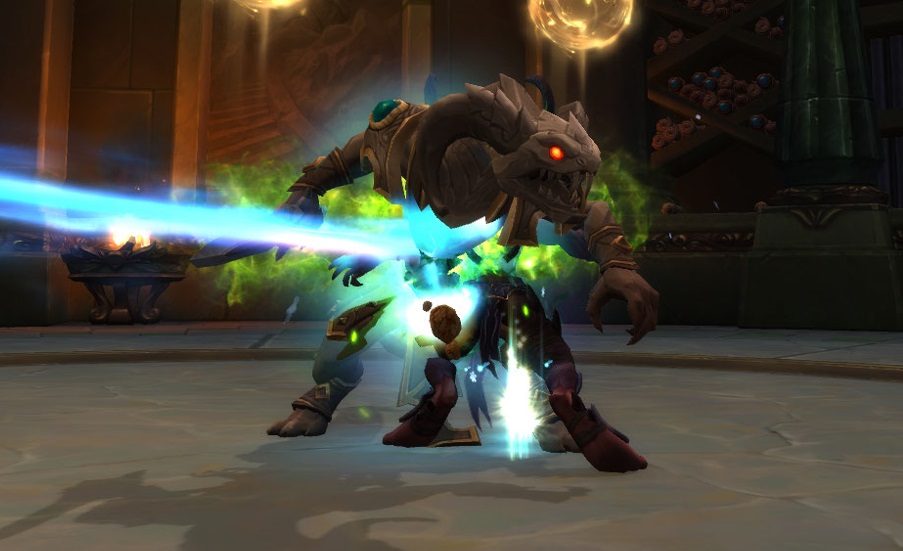 Welcome to Uldaman Sound and Light Show! The fight against Pyron takes place in a circular room. All around you will see inert Vault Guardians who play a major role in the battle.

As soon as the fight begins, Pyron will Activate Guardians. He activates three at a time. These guards will throw Seeking flamefireballs that you must avoid or take damage.

Seconds later, Pyron will stand in the center of the room and bond with the Guardians. These can then be targeted by players. Attack them and kill them as quickly as possible. This is essential because during this time, Pyron is channeling columns of flames that revolve around the room. These flames hurt a lot, so be careful that they don’t hit you while you deal with the guardians. Additionally, Pyron casts a Wave of Fire every three seconds. We must therefore eliminate the guardians very quickly to reduce the overall amount of damage to the group.

Outside of these more tense moments, Pyron can also cast Unstable embers on a random character. The player immediately realizes this because an aura appears under his feet. He must then move away from the other players in order to avoid damaging them when the explosion occurs. Finally, the boss can also throw Incendiary Blow. It is a spell that is primarily intended for the tank since it hits the targets located just in front of Pyron. 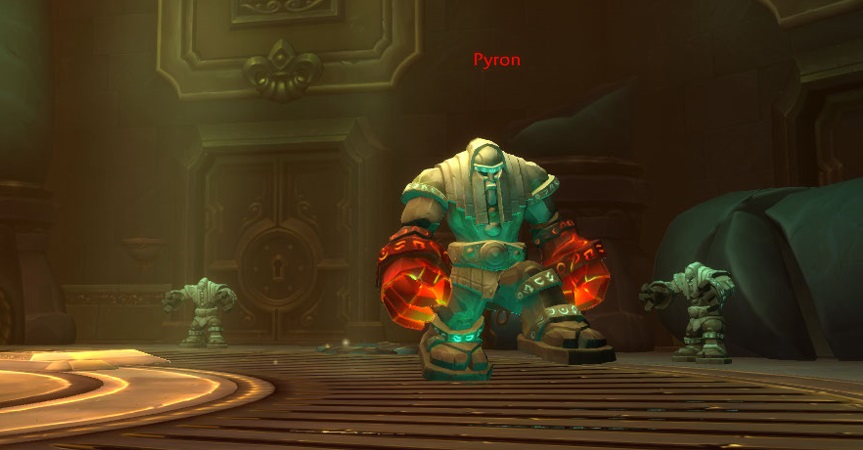 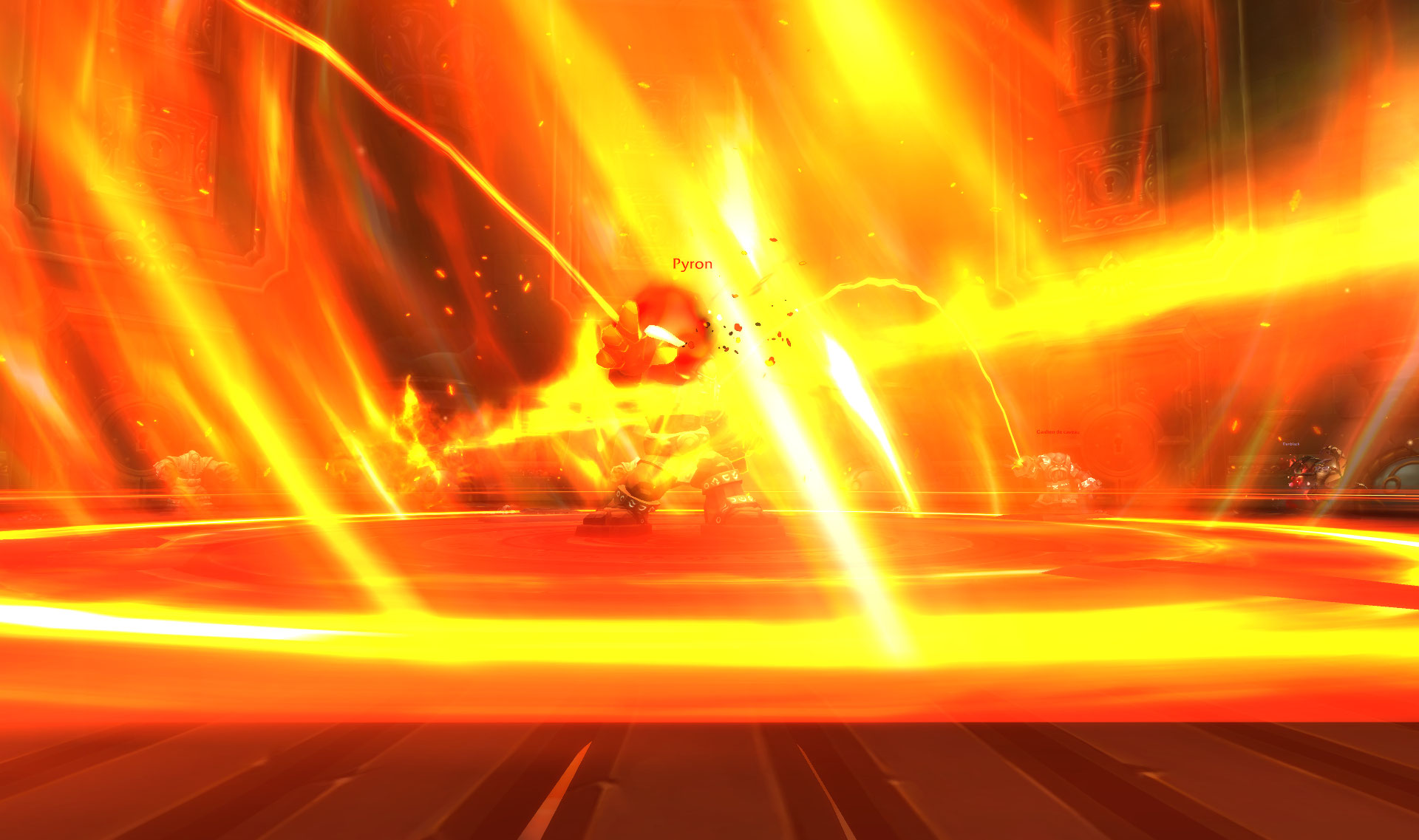 Deios is Uldman’s final boss. If he first appears in his humanoid form, you will face him in his dragon form.

The first skill to watch out for is orb of eternity. At very regular intervals, the boss drops golden orbs from the ceiling. If a player is at the point of impact, he will take damage (nothing bad). On the other hand, the place immediately becomes a zone of eternity. Anyone in it takes damage every second and takes a 30% haste debuff. In short, do not stay in the yellow areas.

At times, Chronolord Deios will Reverse the course of time. The screen goes black and white and all players take a DoT for 12 seconds. Eternity Orbs become Temporal Orbs and go up to the ceiling. Eternity Zones that should not be walked on become Time zones on which you MUST walk. This will give you a 50% haste buff!

These mechanics are the most important to consider. Apart from that, Deios has two other skills:

The fight against Chronolord Deios is not the most difficult of the instance. You have to move to avoid certain AoEs but there is nothing too bad. Watch out for healers during the time reversal, where all party members will take damage. 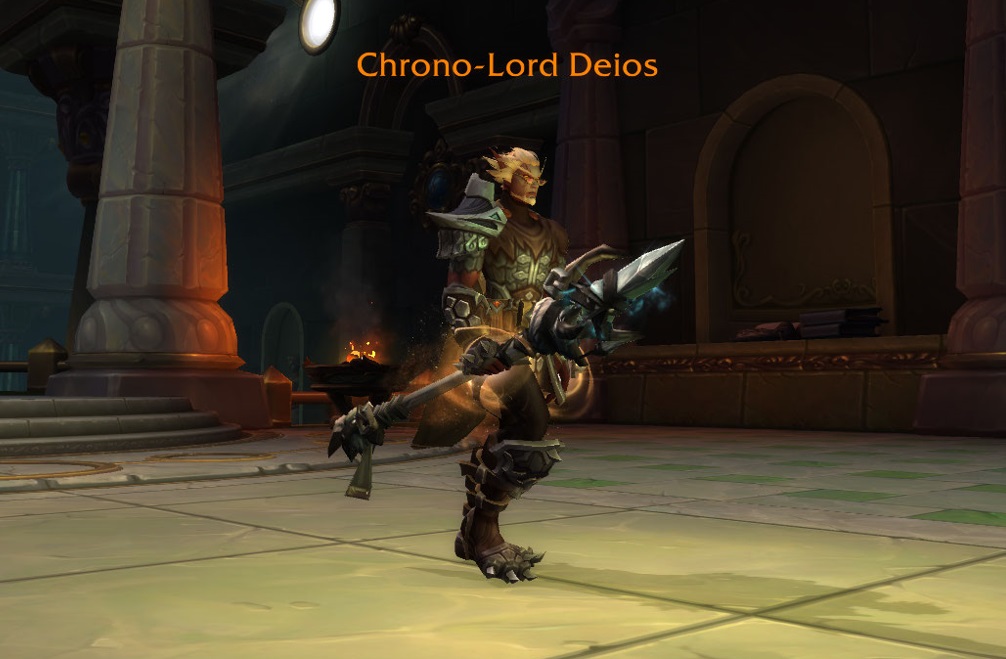 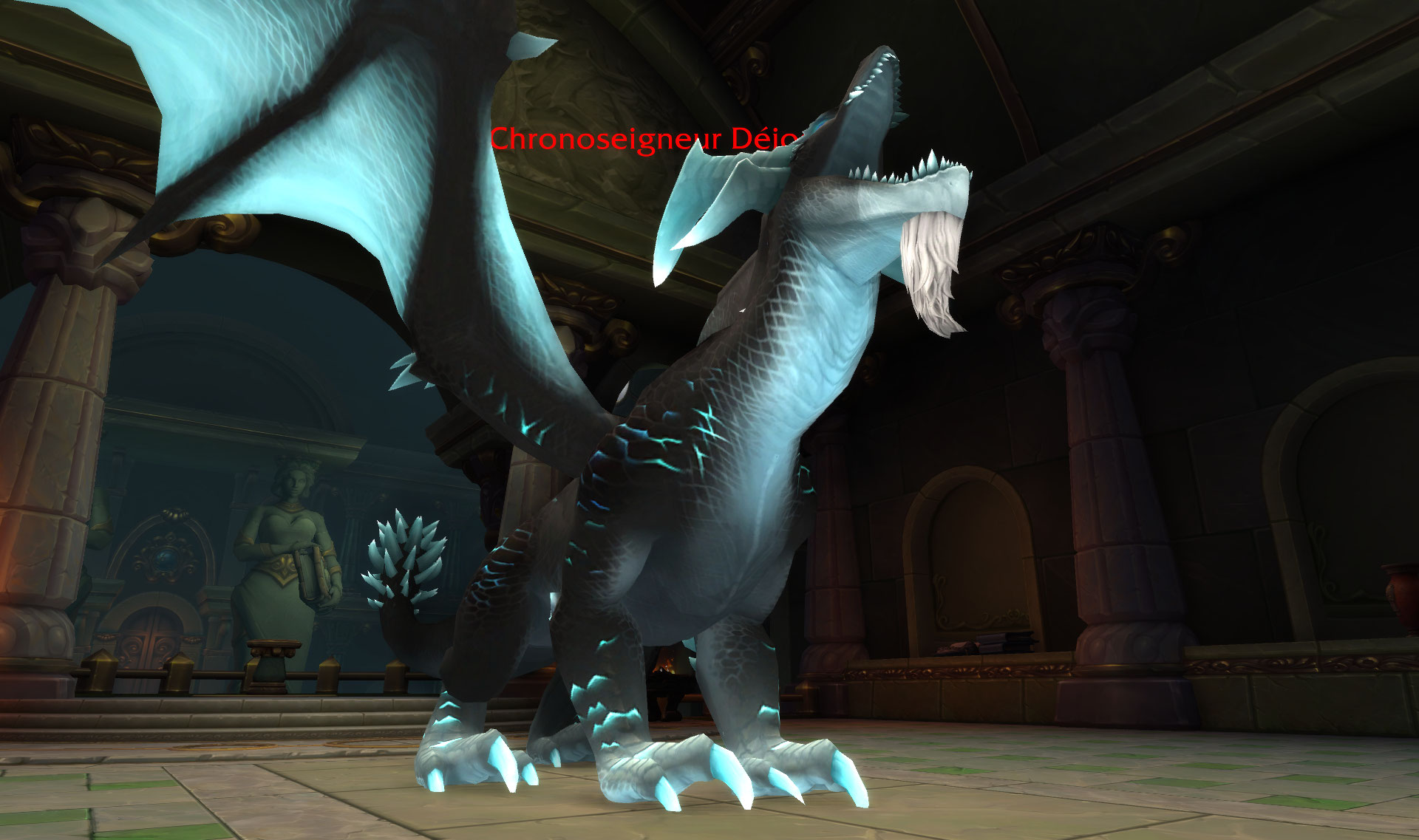 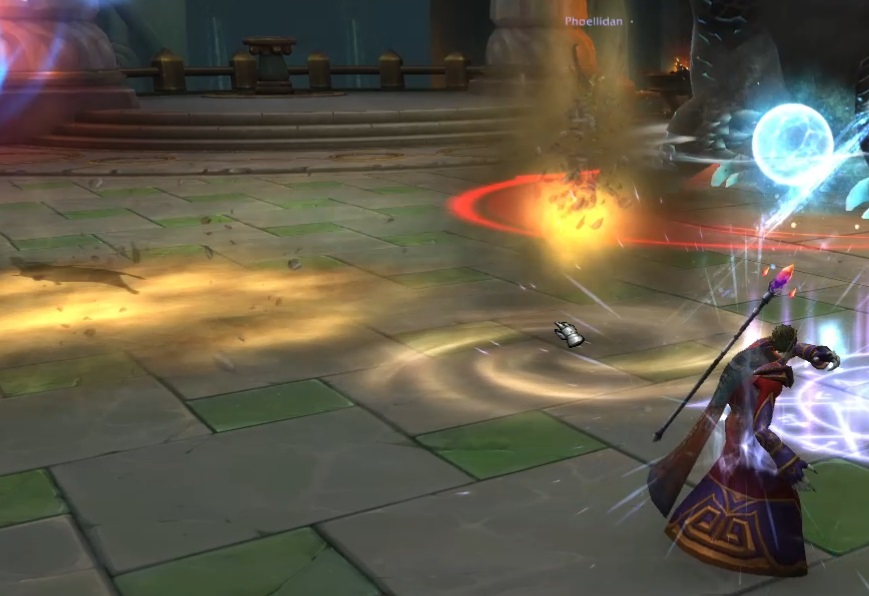 Here we can clearly see the Orb of Eternity coming to the ground. On the left, an area of ​​eternity.

The OnePlus 10 Pro is finally getting a big price drop...