The first volume of season 4 of Stranger Things is available on Netflix from this Friday, May 27.

SERIES – After three years of waiting, the sequel to Stranger Things is finally available on Netflix. The first volume of season 4, consisting of seven episodes, has been online on the platform since this Friday, May 27. The least we can say is that Matt and Ross Duffer, the creators of the series, have seen things big for this new season.

The brothers make the suspense last as much as their episodes. In total, the seven chapters span almost nine hours of viewing. The shortest episode lasts 63 minutes, and the longest (the last), 98 minutes. Suffice to say that it is difficult to watch everything at once, even for big fans of binge-watching.

The second volume, which will be available on July 1 on Netflix, will go even further. It will only be composed of two episodes, but which will last 1h25 and 2h30 respectively. Yes, 2h30 for a final episode longer than some films. Delighted from an extended trip to the 80s, or already tired in front of the screen: the public is likely to be divided in the face of this choice.

What largely explains this exceptional length is the fragmented nature of the plot, which takes place in several places. As a reminder, at the end of season 3, the Hawkins gang was separated for the first time after the relocation of Eleven (Millie Bobby Brown), Will (Noah Schnapp), Jonathan (Charlie Heaton) and Joyce (Winona Ryder) in California. The rest of the group remained in the city of all terrors. For his part, Hopper (David Harbour), presumed dead at the end of the last season, is taken prisoner in a secret Russian gulag. Three places, three different atmospheres.

A separate group means twists from a distance, and more complex storytelling. “There are so many different places it’s called ‘our season season Game Of Thrones‘” quips Matt Duffer in the production notes.

A more adult and terrifying season

If the creators offer a more advanced season, their actors grow over the seasons. The children have now become teenagers. The group of friends return to high school and face the complexities of the big leagues.

Eleven, who has lost her powers, pays the costs of harassment by her classmates. Max (Sadie Sink) withdraws into herself after the traumatic death of her brother Billy. Lucas (Caleb McLaughlin) moves away from the group to become more popular in high school…. Separated and vulnerable, the group will not be spared by a new supernatural threat which arises. 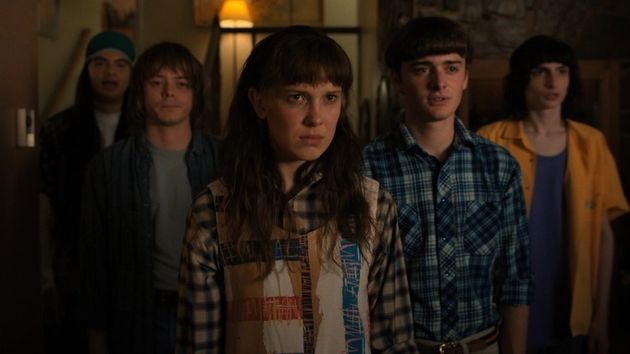 The first volume of season 4 of Stranger Things is available on Netflix from this Friday, May 27.

This new chapter then becomes more adult, and therefore more terrifying. The menacing human-like creature is particularly effective. “Overall, the tone of the season is darker than the previous ones. The goal was to make it the scariest of all”, explains Ross Duffer. The monstrous humanoid makes the band drool, and punctuates this season with intense passages in horrific actions.

Amber Heard worried: she explains how she wanted to protect Lily-Rose...

The 4 members of ABBA gathered in front of the King...