Before going further in the presentation of these televisions, know that the Q80B screens are pivotal specimens in the range of the Korean manufacturer, between the QLED models and the QLED Mini LED. To sum up, they ship most of the specifications of the Samsung QN85B models but without Mini LED backlighting, replaced here by a Full LED Local Dimming system. If the philosophy remains the same, with diodes placed behind the LCD panel, there are significantly fewer of them, the same for the number of zones (48 according to our information). 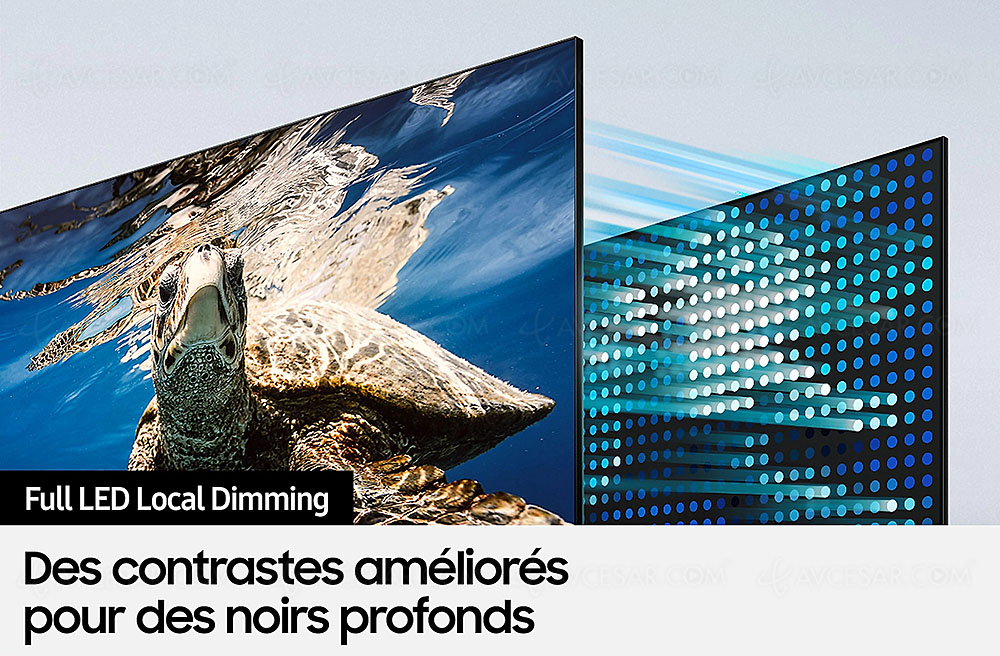 The design of the Q80B vintage 2022 series, called Q Stylish, remains identical to the Q80A vintage 2021 televisions. overall elegance. Note that the thickness of the TV is greater than for those from other series, Full LED Local Dimming backlight system requires. 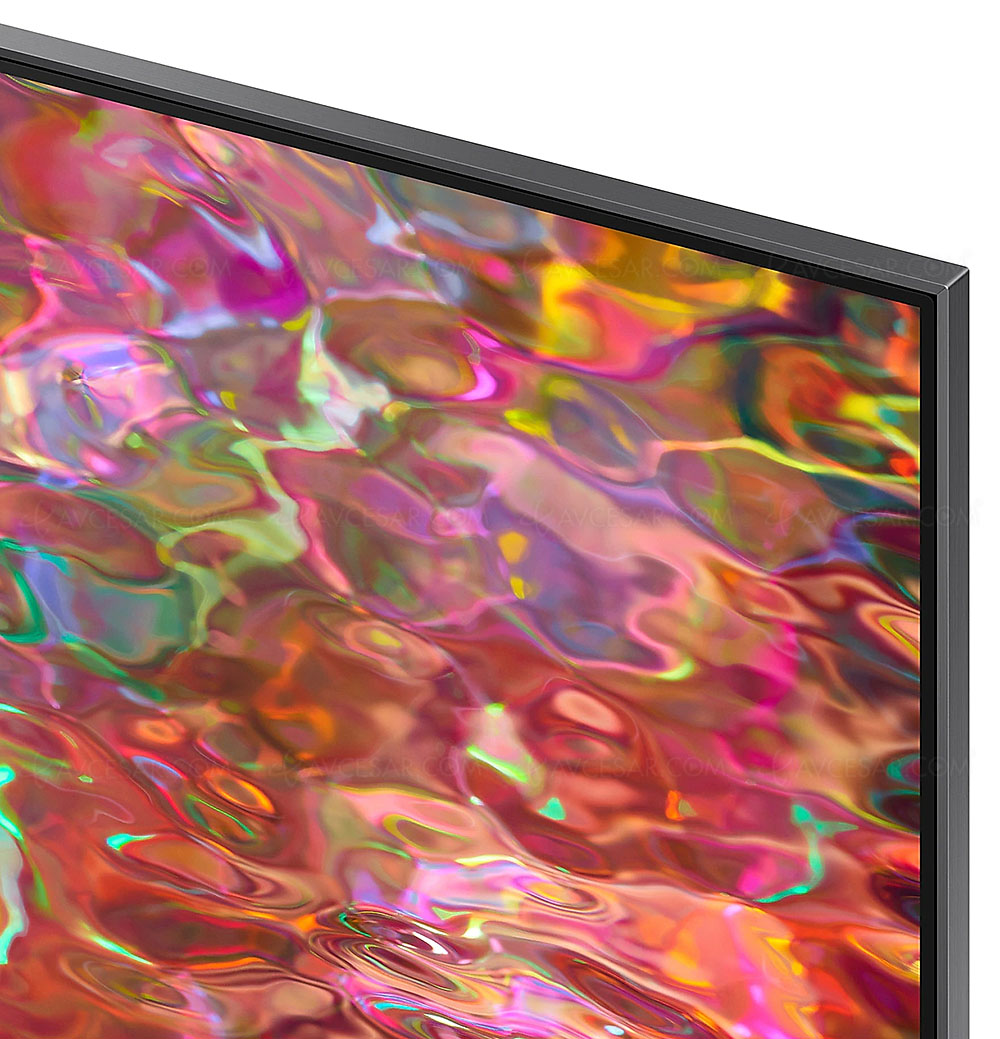 Of course, there is no One Connect box on Samsung Q80B TVs, the connection is available directly on the TV, at the back. 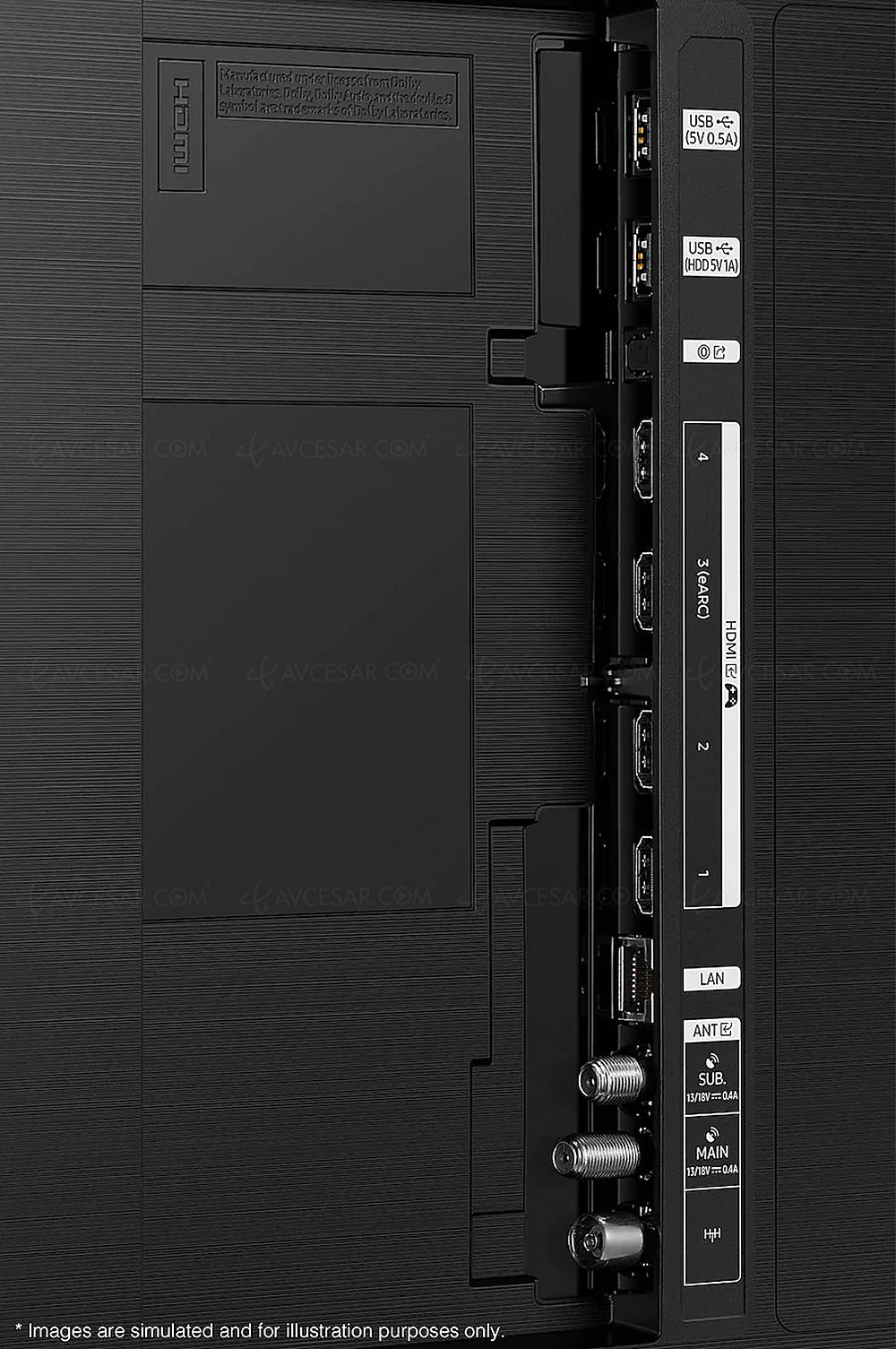 In terms of specifications, the Samsung Q80B Ultra HD 4K QLED TVs incorporate a native 10-bit and 100 Hz LCD panel with a PQI 3800 fluidity index (PQI 3200 on the 50”). They also benefit from the Quantum Processor 4K processor which mixes Machine Learning and Deep Learning processes for a total of 16 artificial intelligence modules (compared to 20 on the higher TV series) at work for even better image quality. 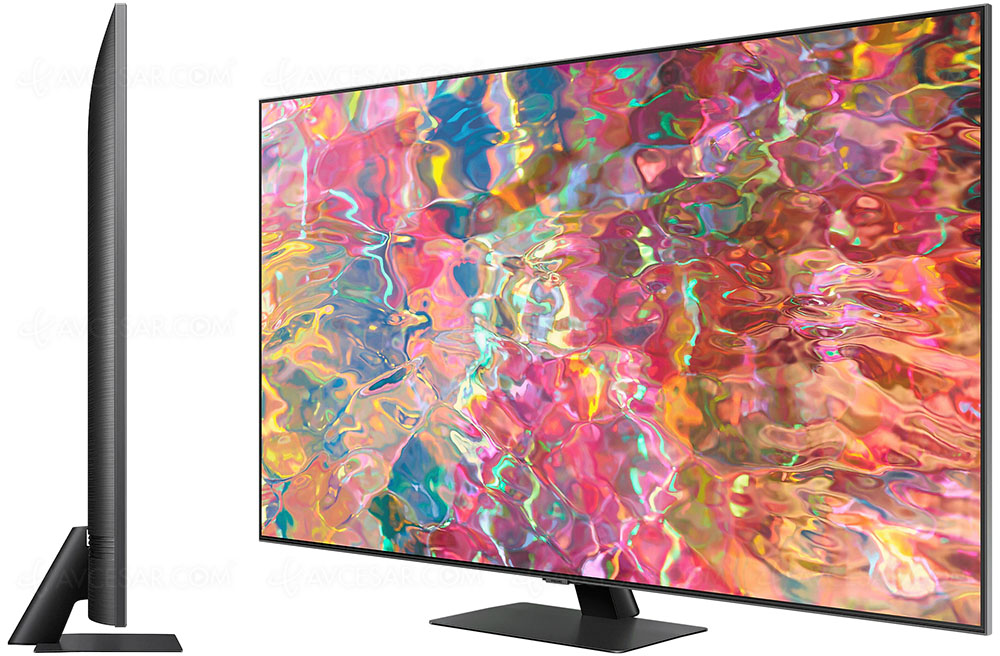 As a reminder, the Deep Learning process is based on a neural model, i.e. without human intervention (unlike Machine Learning) in the learning of the processor. This decides on its own on the necessary changes to the image processing algorithms to regain optimum quality starting from a degraded display. 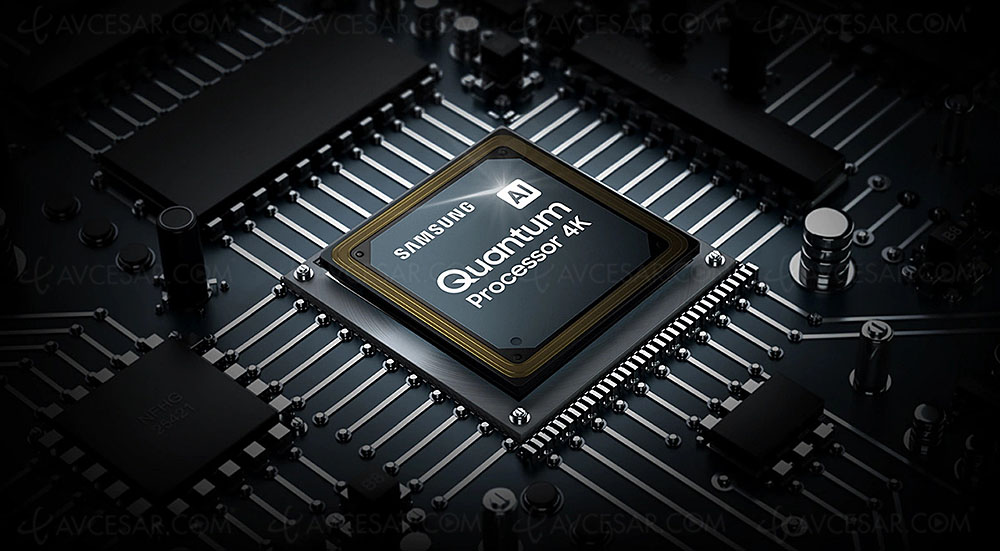 Another improvement is the EyeComfort Mode function which, once the television is connected to the Internet, subtly modifies the brightness and color temperature of the image according to the time of day, for optimal viewing comfort at all times. The latter, for example, reduces the blue light emitted in the evening to promote the sleep of sensitive people. 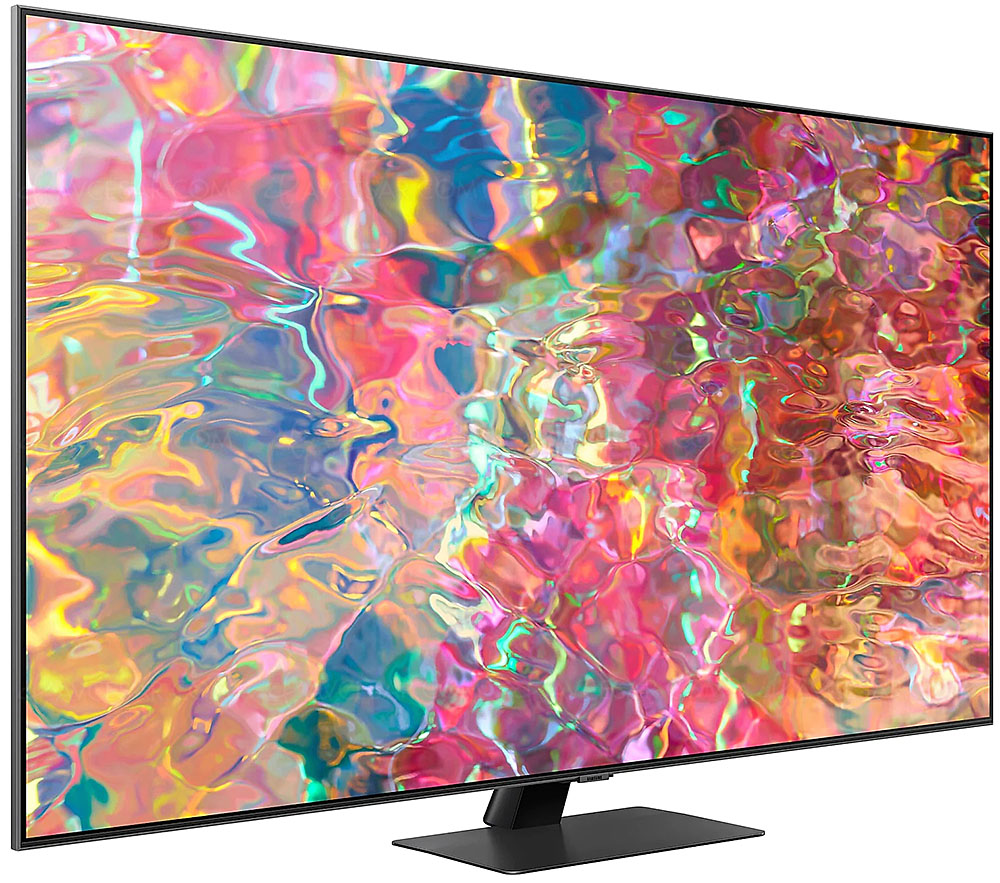 Even though the Q80B displays lack a Mini LED backlight system, their peak light performance is still outstanding at 1500 nits. This is a more than interesting element for an unprecedented HDR experience, knowing that the Q80B screens manage HDR10, HDR10+, HDR10+ Adaptive and HDR HLG. 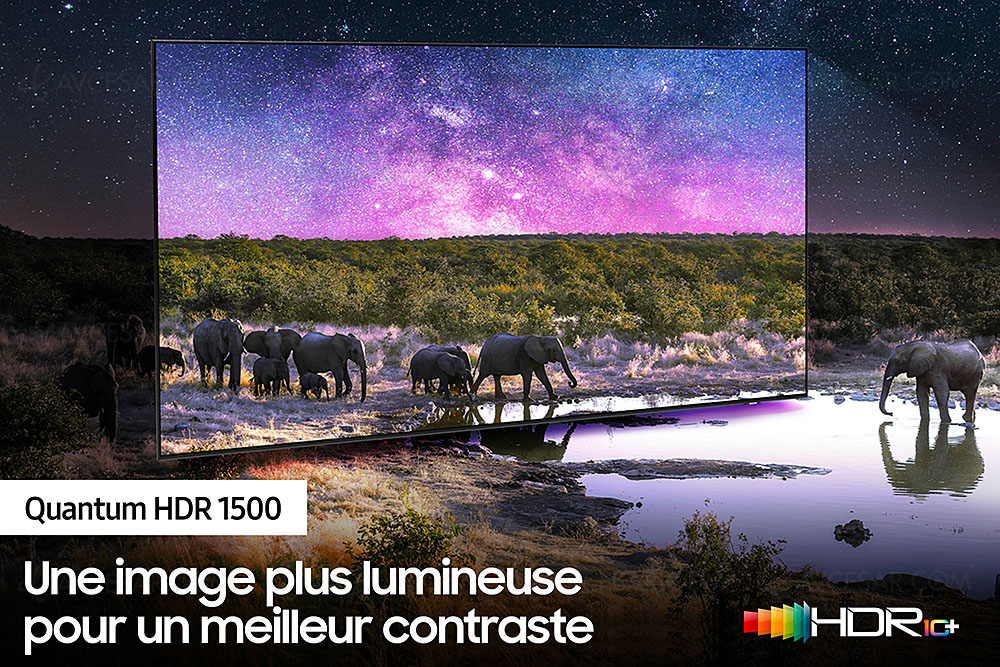 Too bad, the Q80B screens do not have the QLC (Quantum Light Control) coating with an extremely low reflectance index (reflections are almost non-existent). On the other hand, they benefit from an enlarged viewing angle via Ultra Viewing Angle Technology (inaugurated in 2019).

The sound section is also in the spotlight on the Samsung Q80B TVs. The first concerns the OTS process. This has a total of six speakers placed at the back of the screen (2.2.2 system) for a total power output of 60 watts. Good news, the compatibility of Dolby Atmos tracks is in order. 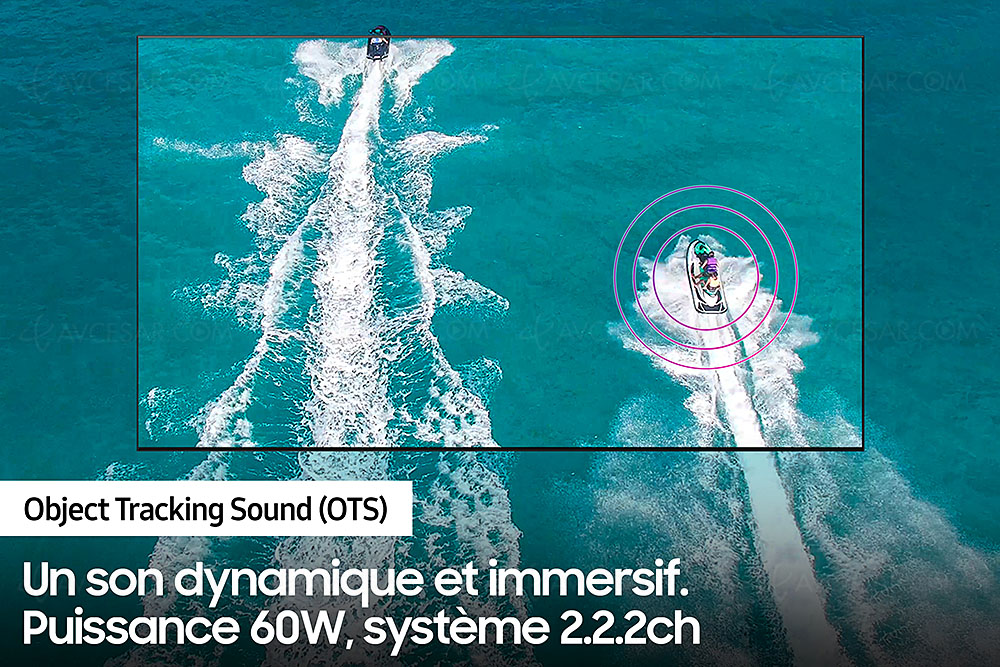 For the rest, we find the Q‑Symphony 2.0 function. The latter consists, in the presence of a connected Samsung Q‑Series 2020/2021/2022 soundbar, in taking advantage of the speakers of the television in addition to those of the soundbar to magnify the sound reproduction, its magnitude and its spatialization. .

Indeed, until then, when a sound bar is connected to a TV, the speakers of the latter are then disconnected. With the Q‑Symphony system signed by Samsung, they remain active and greatly contribute to the perceived audio improvement with a configuration up to 11.1.4 depending on the soundbar connected. And the demonstration we have witnessed truly demonstrates the effectiveness of the process and its relevance. Namely, if the soundbar is connected wirelessly to the television (via Wi‑Fi), the management of Dolby Atmos soundtracks is of course also provided wirelessly. 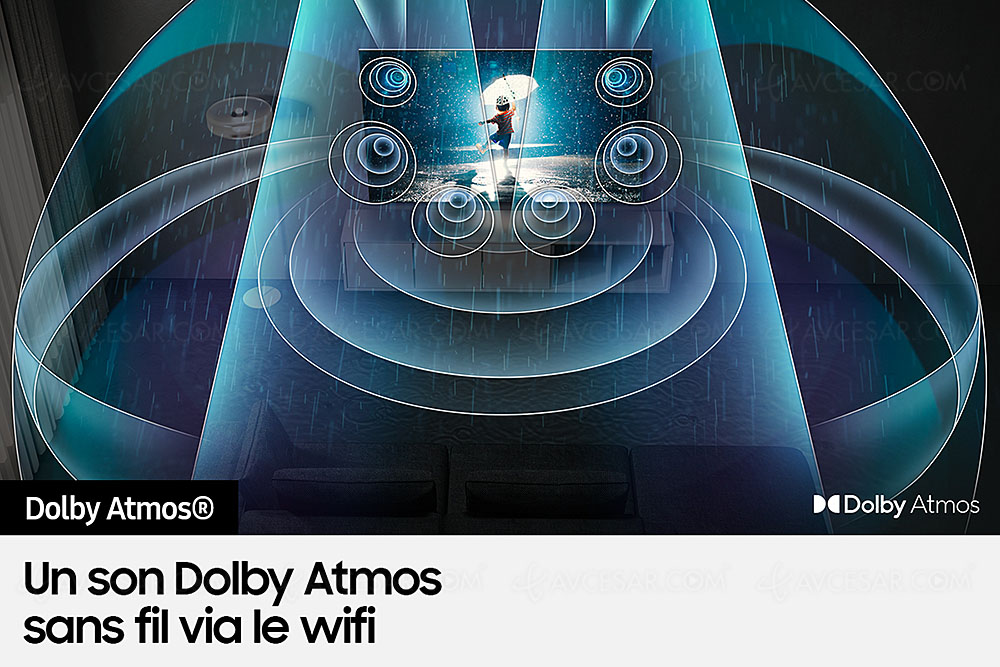 The Adaptive Sound+ function, an evolution of the Adaptive Sound still capable of adapting the audio settings of the TV in real time according to the image displayed, now takes into account the listening room. Otherwise, the AVA (Active Voice Amplifier) ​​function is still required, intended to cover new noise in the TV environment, automatically. For example that of a kettle or a vacuum cleaner which will be covered by an increase in volume managed directly by the TV. Do not panic, the TV lowers the sound, automatically always, when the noise stops.

Another improvement, the Samsung Q80B 4K Ultra HD QLED TVs offer simultaneous on-screen display of two content with the MultiView function through as many windows: the first with the signal from a TV channel or a source connected to the TV; the second with the screen of a smartphone of the user or coming from a game console, or even the internet (see photo below). There are many display possibilities, from classic PIP to displaying two adjacent windows. 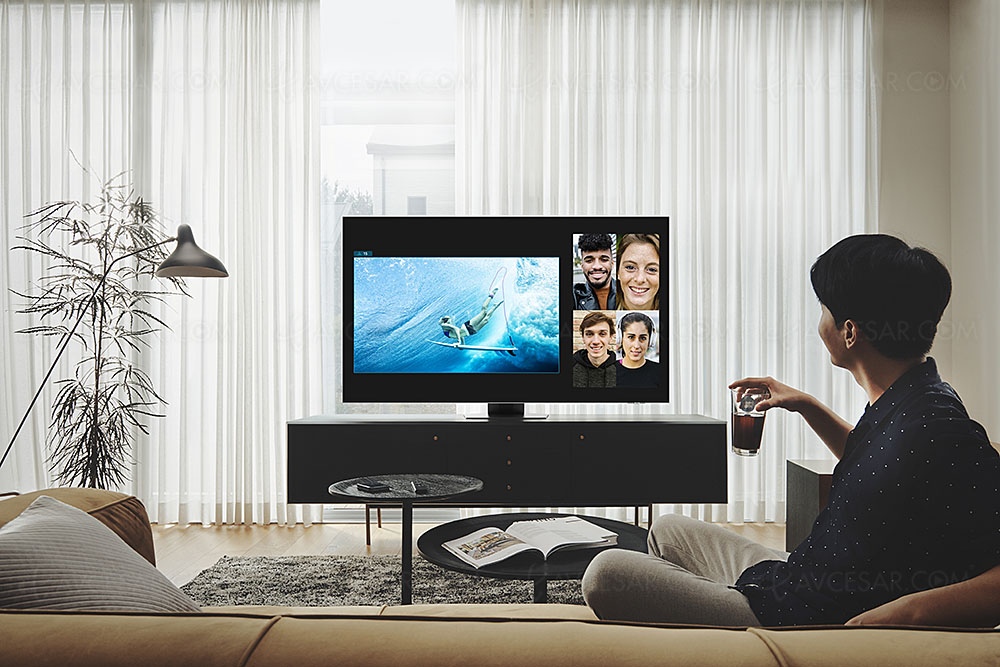 Good point, the HDMI 2.1 standard is required with VRR, Freesync Premium Pro, ALLM, HFR 4K/120 and eARC compatibility on the four inputs. And to activate the Mirroring mode between a Samsung Galaxy smartphone and a Samsung Q80B TV, all you have to do, thanks to the Tap View function, is to touch the second with the first, and you’re done. 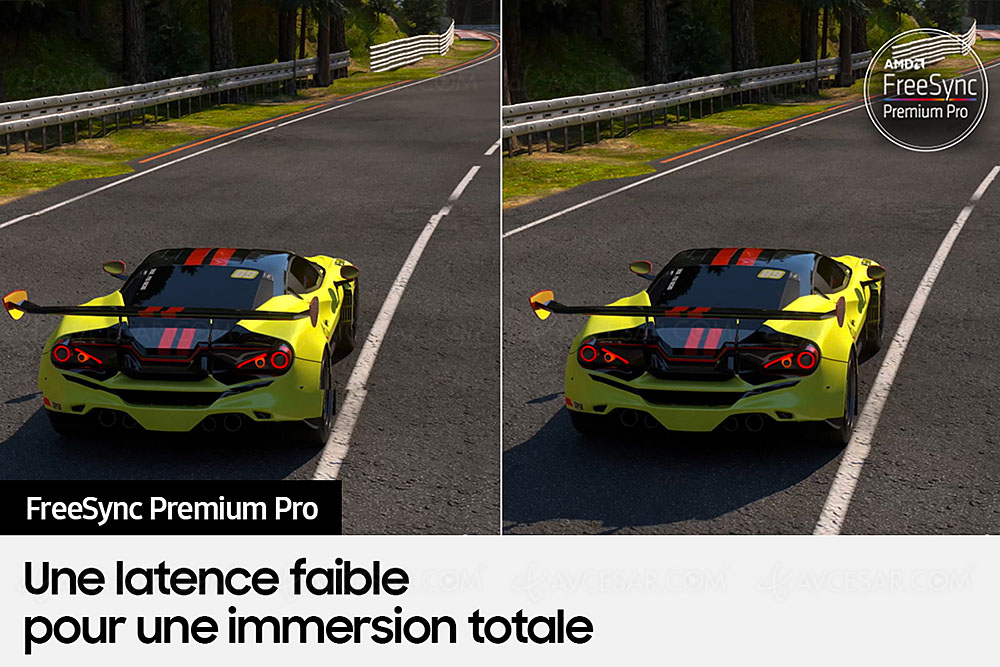 In 2022, the Tizen interface will change radically for ever more advanced ergonomics on the one hand, to give pride of place to content on the other. Namely, Samsung is currently working with Internet access providers to develop IP TV applications allowing you to enjoy it directly from a Smart TV and eliminate the need for a TV decoder. Thus, Orange TV would be accessible with a Login/mdp like myCanal for example. 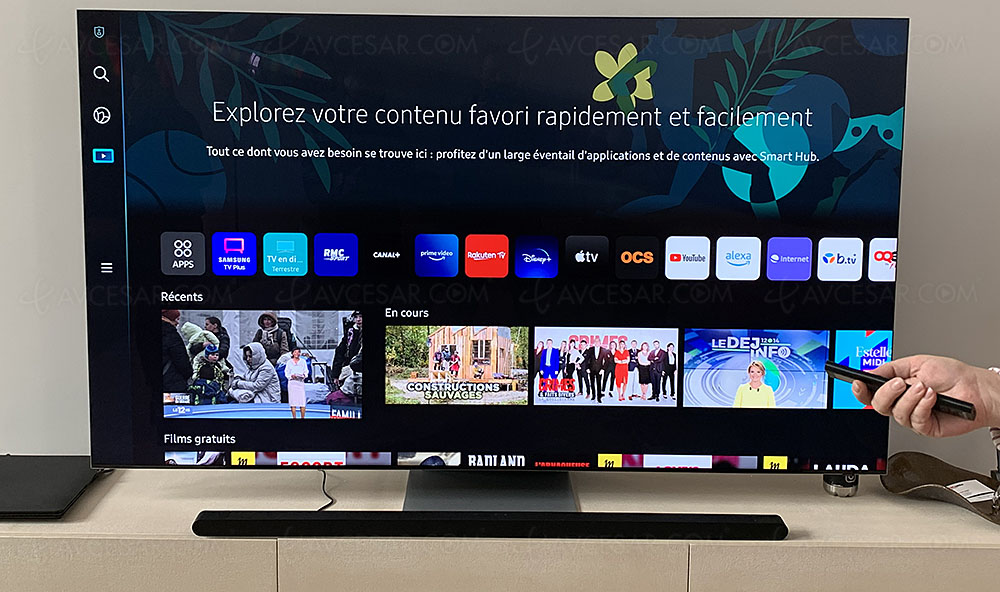 The Bixby voice assistant is still available, as are Google Assistant and Amazon Alexa. And it is possible to easily switch from one to the other via the menu. On the connectivity menu, we must mention the Wi‑Fi 5 function, Bluetooth 5.2 and AirPlay 2 compatibility plus many communication features (Google Duo For example for video calls) or the possibility of working on these Microsoft documents via the Cloud on TV screen. 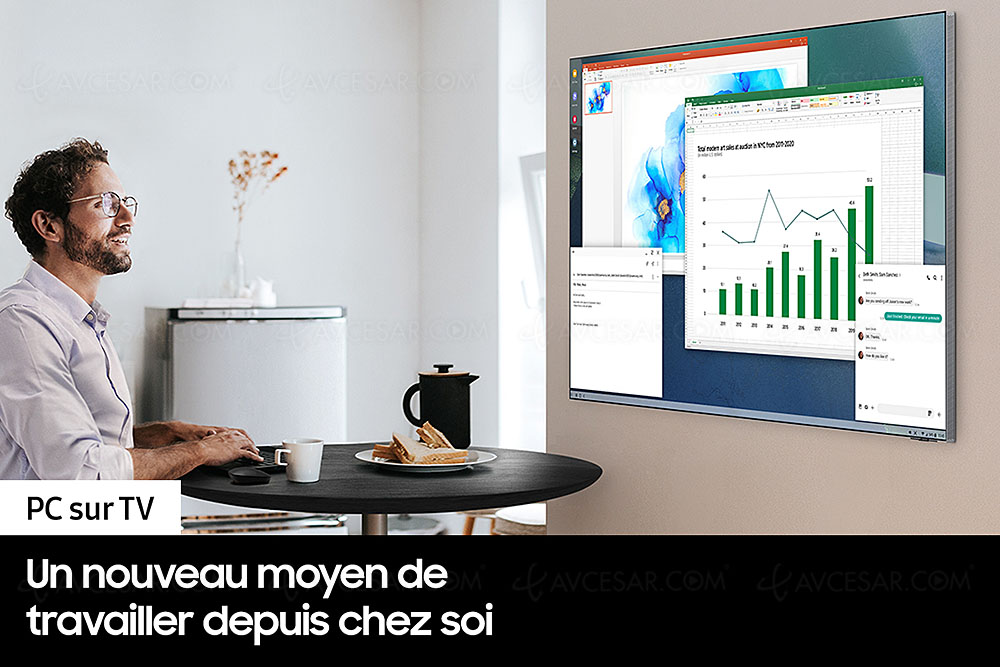 There are also 16/9, 21/9 or even 32/9 display modes for video game enthusiasts with the connection of a PC and the Game Motion Plus mode. As a reminder, the latter (adapted to video games as its name suggests) is very interesting since it allows you to activate the motion compensation process of the TV with games while maintaining a fairly low Input Lag. Without forgetting the new remote control, still solar-powered but capable, in 2022, of being recharged by RF (radio frequency). Thus, the zappette takes advantage of your box’s Wi‑Fi to recharge constantly. 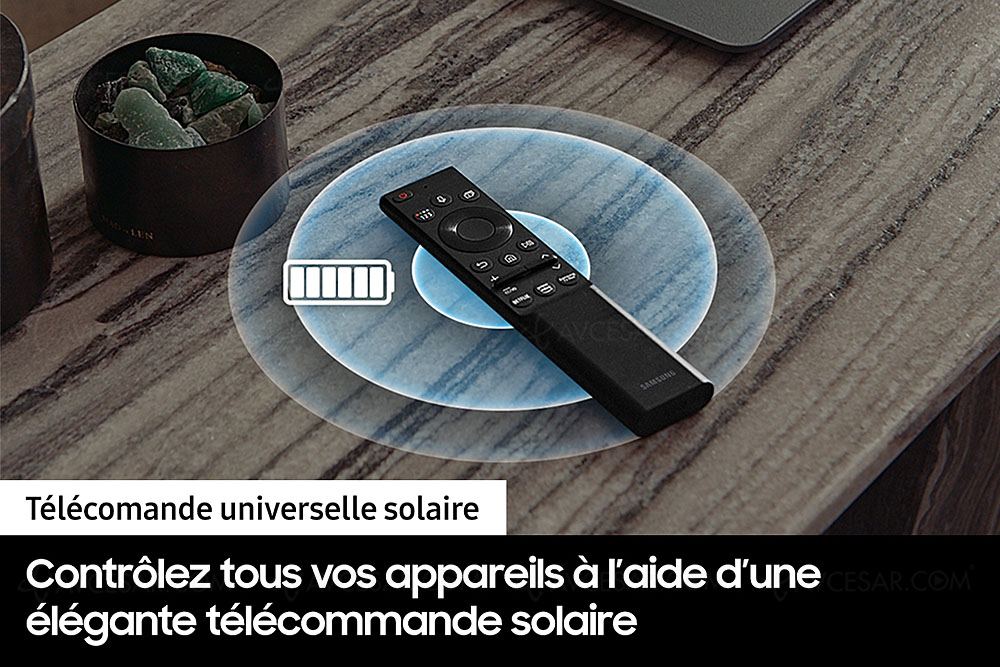 Of course, the SmartThings function is still there. The group’s IoT (Internet of Things or Internet of Things) platform is compatible with Android and iOS and with several hundred devices from other brands (Arlo-type surveillance cameras, Amazon Echo or Google Home-type smart speakers, Philips Hue-type connected lights, connected lock…). Samsung Smart TVs are thus able to fit into the most modern interactive ecosystems with a major advantage, directly linked to their DNA, the possibility of displaying a great deal of information on their screen: the face of the person who has just rang at the front door, the contents of the Samsung Family Hub refrigerator, notifications from the robot vacuum cleaner or even from the washing machine when the cleaning or washing cycle is finished. The television thus becomes the preferred interface for accessing the functionalities offered by Smart Home equipment. 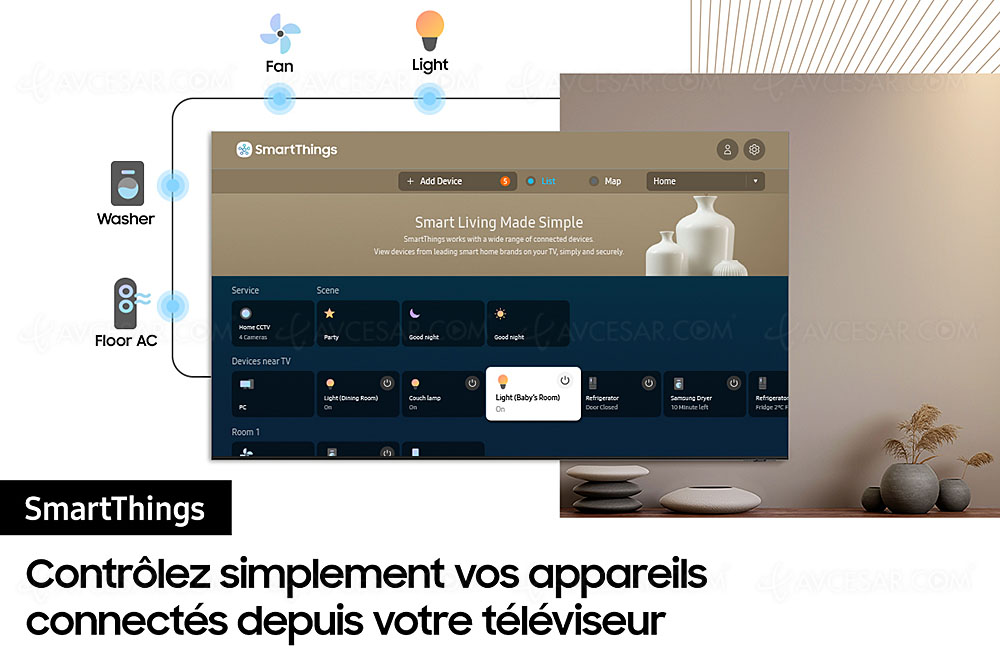 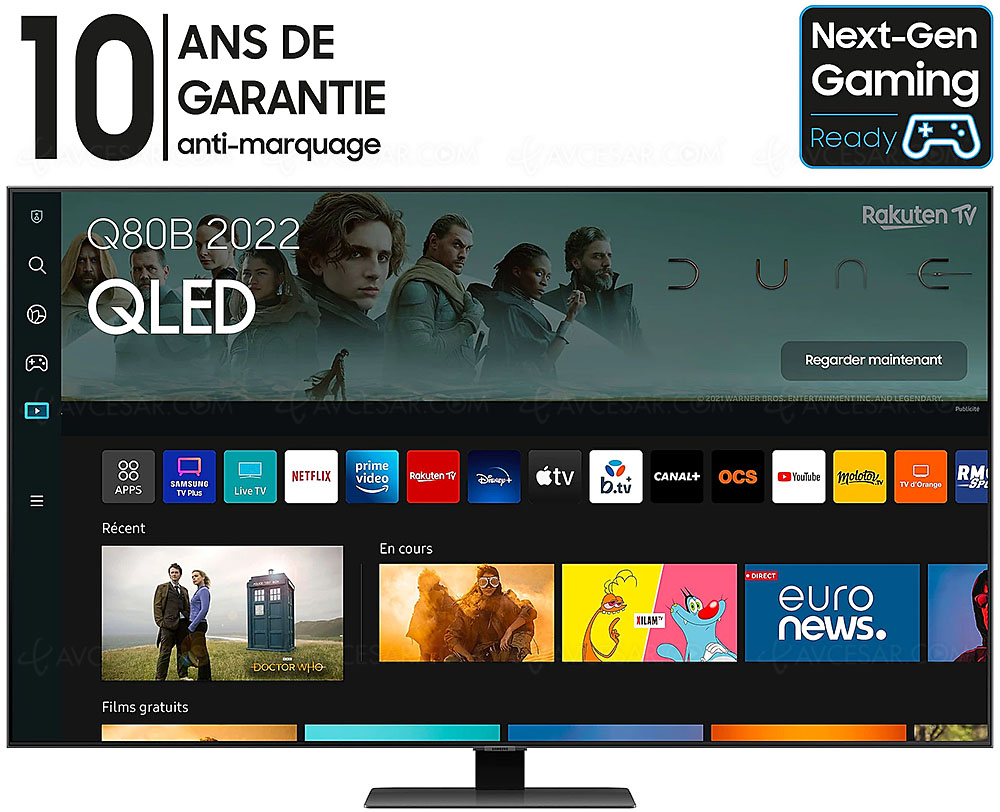 Reminder of the key features of Samsung Q80B TVs:

• Inputs: 4 HDMI 2.1, one of which has the eARC function, two Fat32 and NTFS compatible USB Host ports, an Ethernet port plus a CI+ port and Canal Ready certification

JV – Mario Strikers: Why the return of Nintendo-style football is...

these 10 offers you could regret for life

Mario Strikers, Duke Nukem… 10 video game commercials that would be...